Yucatán is known all over the world not only for its amazing nature and archaeological sites, but also for its delicious gastronomy. Yucatecan cuisine offers a huge variety of different flavors, mixing ingredients such as corn, tomato and beans with many unique products, such as sour orange, achiote and habanero chile. Yucatecan gastronomy wouldn’t be complete without the habanero chile, as it is a very important complement in most dishes, either in natural form or purée or salsa.

The habanero (/(h)ɑːbəˈnɛəroʊ/) is a hot variety of chili pepper and it’s the spiciest chile of Mexico, rated 100,000–350,000 on the Scoville scale. The Scoville unit of measure is directly related to a chemical called capsaicin. The higher the number, the greater the concentration of capsaicin. Unripe young habaneros are green and they color as they mature, becoming orange (semi-mature) and red when they ripe.

The habanero chile is an herbaceous plant or bush that can grow up to 2.5 meters. It comes from the exotic lands of South America, from the South of Brasil to the North of Argentina, passing through the East of Bolivia and the West of Paraguay. It was then introduced to the Yucatán Peninsula via the Caribbean Sea by indigenous migrants. Before arriving in Mexico, they say the habanero chile reached Cuba. For some reason, it is possible that the name habanero refers to La Habana. When it finally arrived in Yucatán, everybody was very delighted with its explosive flavor. 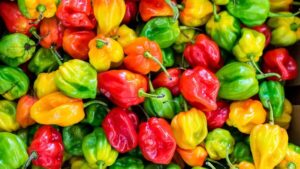 Habanero Chile of the Peninsula of Yucatán

The habanero chile only grows in very hot and humid lands. Did you know that it doesn’t stand temperatures lower than 15°C? Habanero chile loves the heat, the sun and the water. It’s precisely from such elements that come that spicy flavor we taste. Yucatán is the perfect land for growing habanero, with its very hot and humid climate. Although habanero chile is also grown in other parts of México, like Baja California Sur, San Luis Potosí, Sonora and Tabasco, more than 50% of the production comes from Yucatán, Campeche, and Quintana Roo (the states of the Yucatán Peninsula). Since 2010, such states own the denomination of origin which certificates the authenticity of the habanero chile. After the jitomate, the habanero chile is the most cultivated in the region. The 80% of the production of habanero chile is commercialized as fresh fruit. The remaining 20% is used dried, ground or in sauces. It is mainly exported to the United States, Japan, South Corea, Italy and Germany. 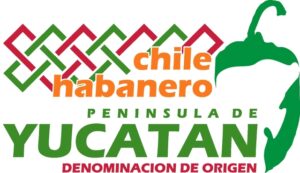 As mentioned before, habanero chile is used in almost every dish of the Yucatecan gastronomy. One very popular way to consume it is in a sauce called “Xni pec” (pronounced schnee-peck) with tomato, onion, coriander, and sour orange or lime juice. Xni Pec is a Mayan word which means “wet nose of the dog”, suggesting that the sauce is so hot it makes your nose run. The habanero chile is also served fresh to accompany many local dishes such as huevos motulenos (eggs-based dish) and tortas or tacos de cochinita (pork sandwich or tacos). If you are brave enough, try it fresh and raw, biting the habanero chile together with the rest of your meal. 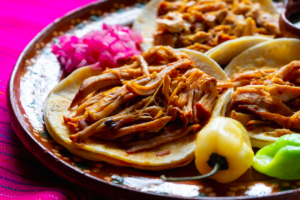 Because of the high concentration of capsaicin, the consumption of habanero can promote several health benefits. Scientific studies have shown that eating habanero can offer a beneficial effect against prostate cancer, it helps fighting obesity and lower cholesterol levels and it can be effective at lowering blood pressure. One single habanero has 128 grams of potassium, it’s very high in vitamin C and the high level of capsaicin is a natural anti-inflammatory that can help to treat arthritis and headaches. Thanks to its special properties, habanero is also used in medicine and in the chemical industry. Its components are used to make ointments and unguents to relieve severe pain caused by arthritis. In the chemical industry, habanero chile is used to create the base for paintings and also to make tear gas. 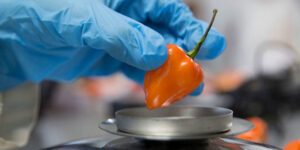 Have you ever imagined that something so small could hide so many health benefits? If you haven’t tried habanero chile before I highly recommend you to try it! It’s something you definitely can’t miss when visiting Yucatán! If you want to know more about Yucatecan gastronomy, check out this article where we tell you about the 10 must-try dishes in Yucatán!