The city of Mérida was founded in 1542 by the Spaniard Francisco de Montejo. When the Spaniards arrived, Mérida was a large Maya city known as T’ho. It was conquered by the Spaniards, who dismantled all the pyramids and used the huge stones as the foundation for the Cathedral of San Ildefonso (1556-1599), the oldest cathedral on the American continent.

When founding the new city, the Spaniards were incredibly organized as Mérida’s downtown streets create a perfect square grid with a very logical naming system: no name, just numbers. From North to South, the streets have even numbers. Going North the number decreases, going South the number increases. From East to West, streets have odd numbers, going East the number decreases, going West the number increases. For example, Calle 60 is followed by Calle 62 if going West. If you’re on 64/59, and you head one block north then one block west, you’ll be on 66/61. Once you understand how things work, it’s pretty hard to get lost here! 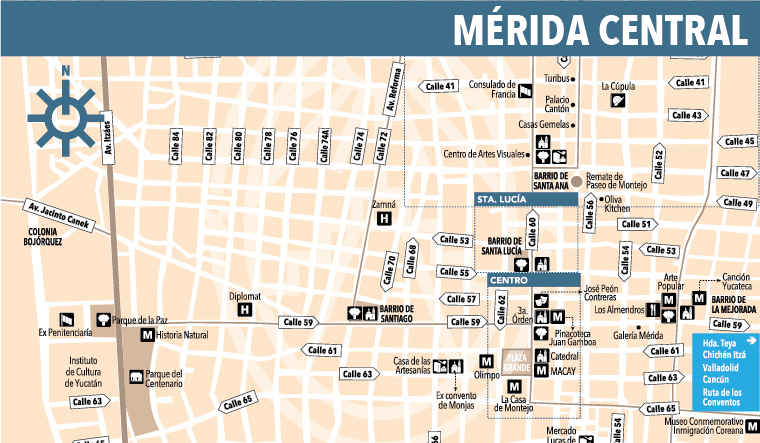 It’s all about the landmarks

Even though this naming system is pretty easy to understand, in the early colonial days, the inhabitants of Mérida were very confused. To aid in navigating the growing city, Spanish colonialists decided to adopt the form of pictorial signs. The only sure way to direct someone to a destination was with the use of landmarks, like a park, a church, or the main plaza. To help to make navigation easier, shop and tavern owners started to turn their establishments into landmarks using memorable names of people, places, events, or animals. They made effigies, statutes or murals to create a remarkable symbol on their buildings. Corners were easy to find and attracted businessmen to build on street corners. It wasn’t long until people were navigating around the city by following these corner landmarks.

Over the years, the importance of the corner landmarks faded away as murals were painted over and statues collapsed. Such symbols were in danger of being lost. Luckily, the city government stepped in and began making the distinctive red and white plaster plaques we find today when walking the street of Mérida. 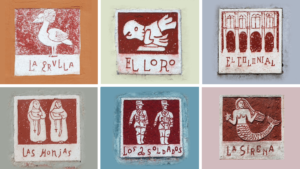 Each named corner has a unique story attached to it, even though only a few of them are known as most of them have not been written down. Some corners date back many years. The corner “el elefante” (the elephant), for example, appeared in documents as far back as 1800 when one of the first big merchants of the city decided to create a special landmark to make him more popular among the inhabitants. The owner of the building and the type of trade changed a lot over the years, but the statue is still an important landmark of the city, helping navigating people and attracting curious tourists. 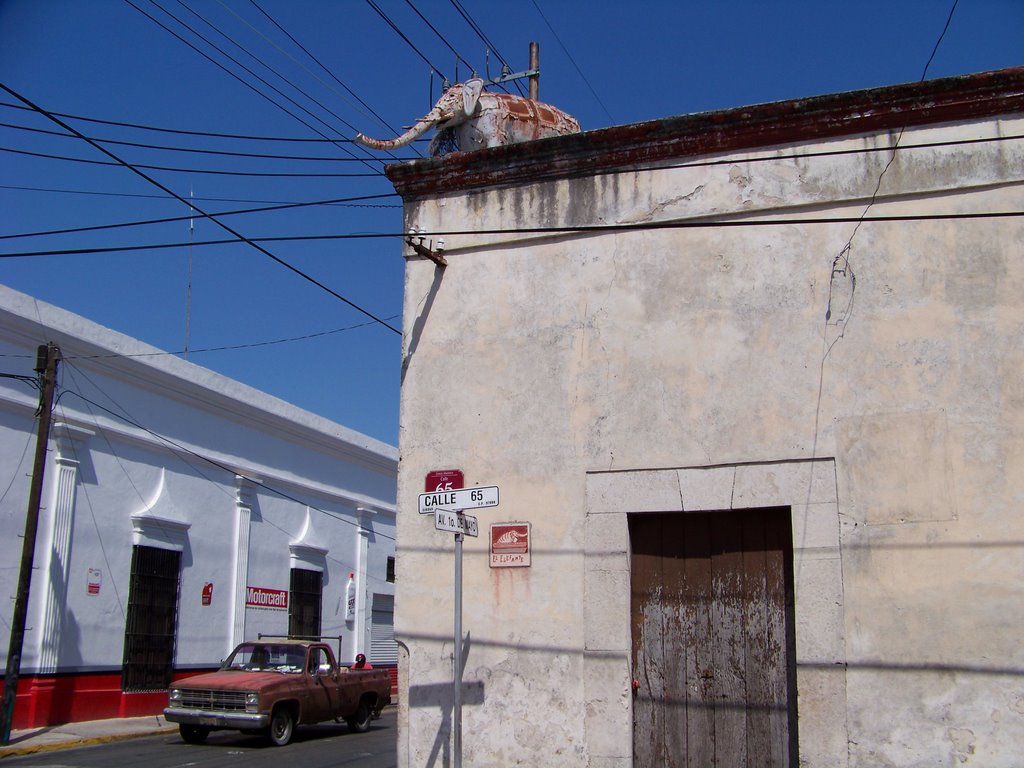 The corner of “el loro” (the parrot) is located on street 62 and 55 where hundreds of years ago two old ladies were living with a chicken and a legendary blind parrot that continuously repeated “good night”. When the parrot died, the two young ladies replaced him with a parrot made of wood and the people from the neighborhood started to identify that corner as “the corner of the parrot”. Many years later, the same name was given to a grocery store that was operating between 1925 and 1935. 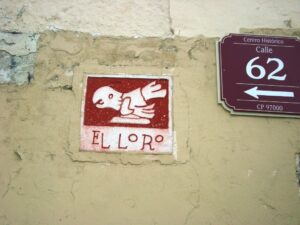 Some corners can be as “simple” as the “corner of the theater”, where the first theater of the city was built (in the middle part of street 60 between 57 and 59). After being destroyed by a fire, the theater was rebuilt and named “Peón Conteras”, which is now the current theater. Other corners are definitely more “original” and hide interesting legends. Like for example the corner of “la tucha” (a monkey), that tells the story of a beautiful young and rich girl who was transformed into a monkey by a witch for being extremely rude with everybody. 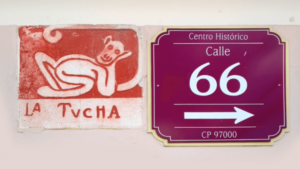 These are only a few examples of stories behind these picturesque red and white plaques. They say there are roughly 659 corner plaques around the city of Mérida, which means there should be 659 stories. Of course, some corners are more popular and important than others, making their stories easier to find. Some plaques even come with a little description next to it.

It’s such a unique thing to see and they make the city even more beautiful and charming. I am pretty sure you will love walking around the city, wondering what was the story behind these special landmarks. If you are not too shy to ask around, I think you could definitely find out some great stories. You have nothing to lose and so much to explore! Mérida and its mysterious corners are waiting for you!

A little bit more than an hour from Mérida, you will find a special place where you can slow down, relax, and connect with beautiful nature. I am talking about the paradisiac San Crisanto, a pretty beach town that has a lot to offer to its visitors. From picture-perfect beaches to jungly mangroves, I am … …

If you love wildlife and nature, this is definitely the perfect place for you. Celestún is a pretty little fishing village located approximately 100 kilometers southwest of Mérida. It is known not only for its relaxed vibe, beautiful white-sand beaches and delicious seafood restaurants but also for its abundant wildlife and its river (ría). But … …